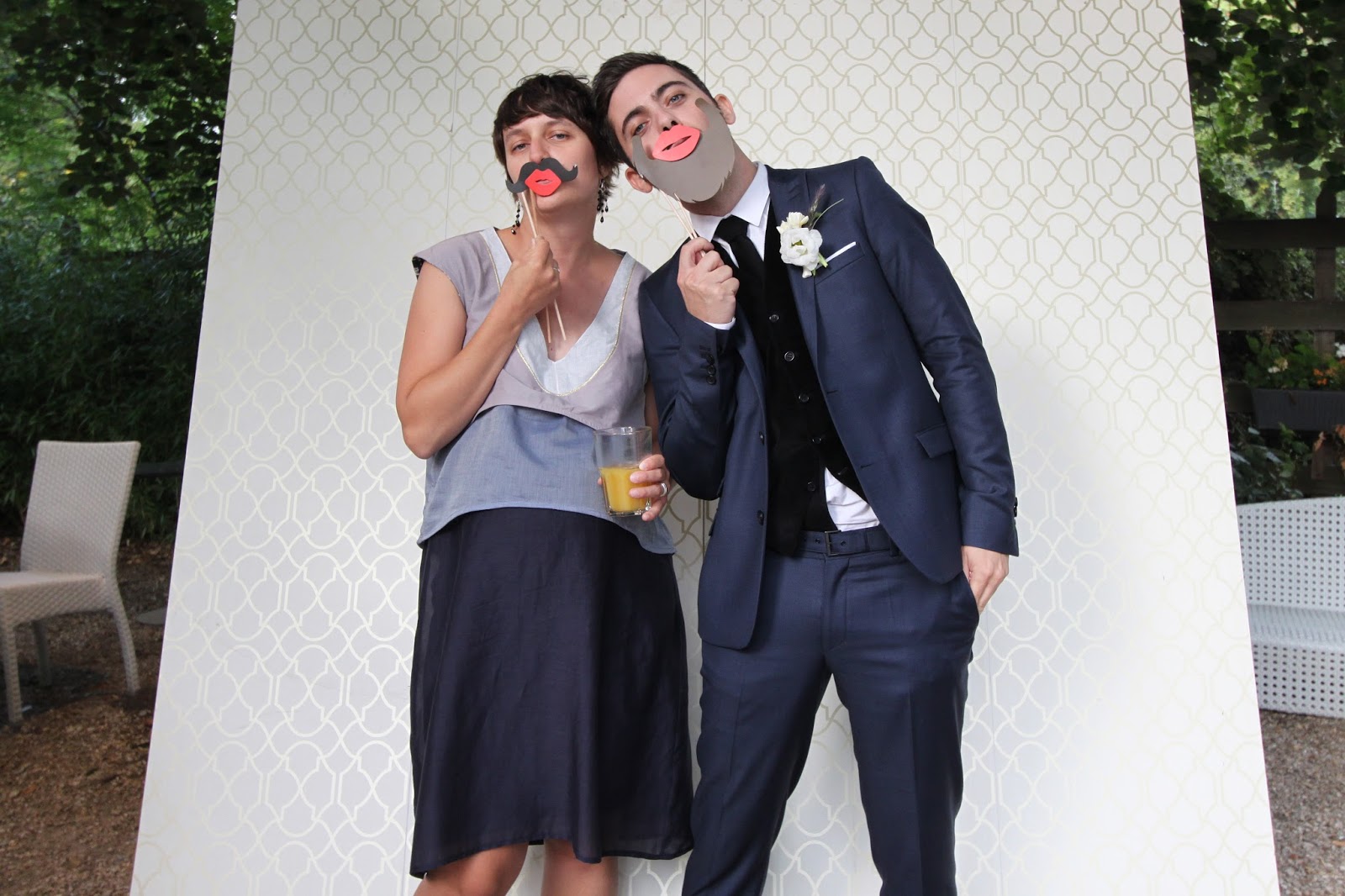 Yeap, this is a first, I'll be now translating my articles in english - this is globalization... 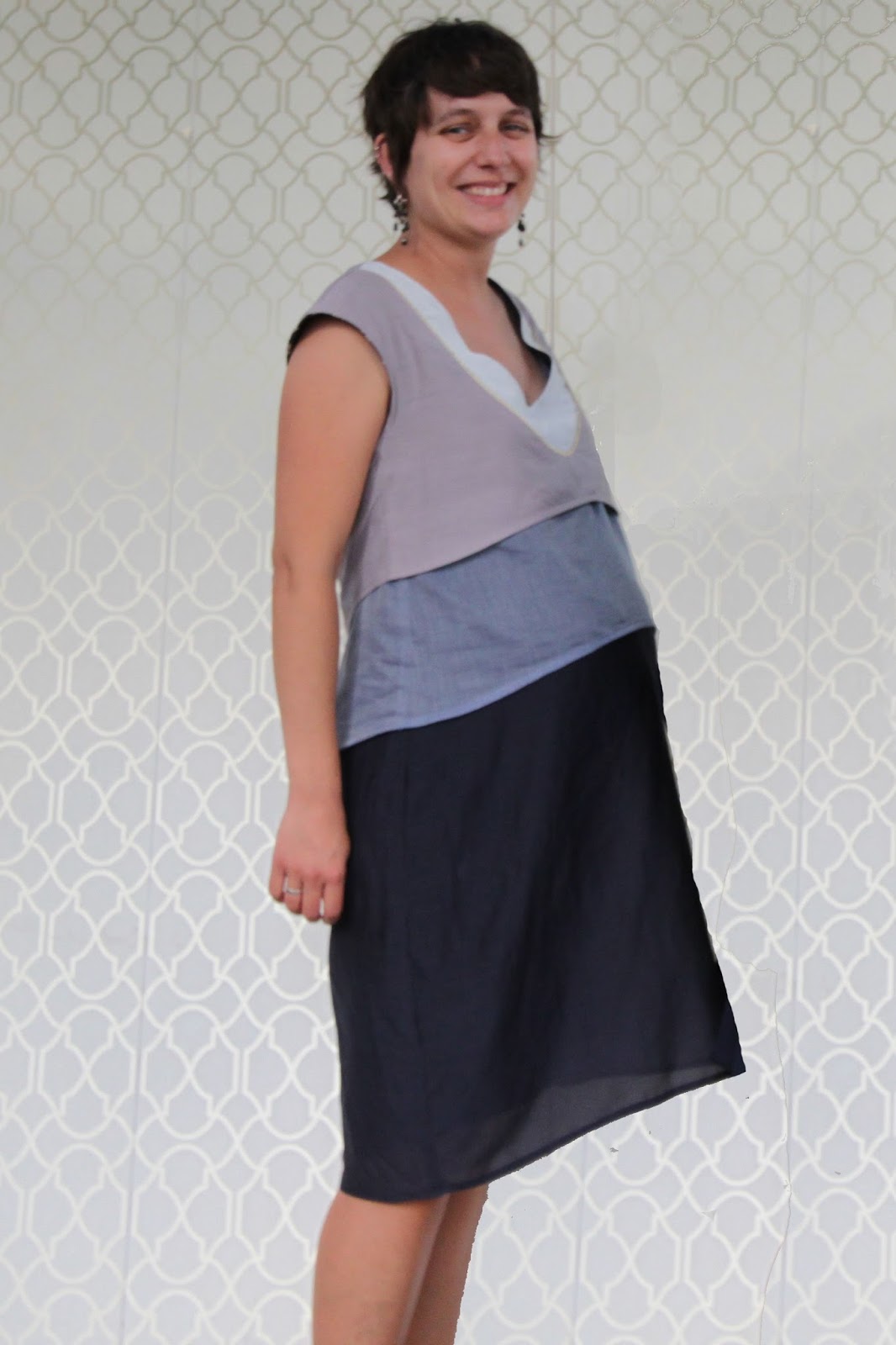 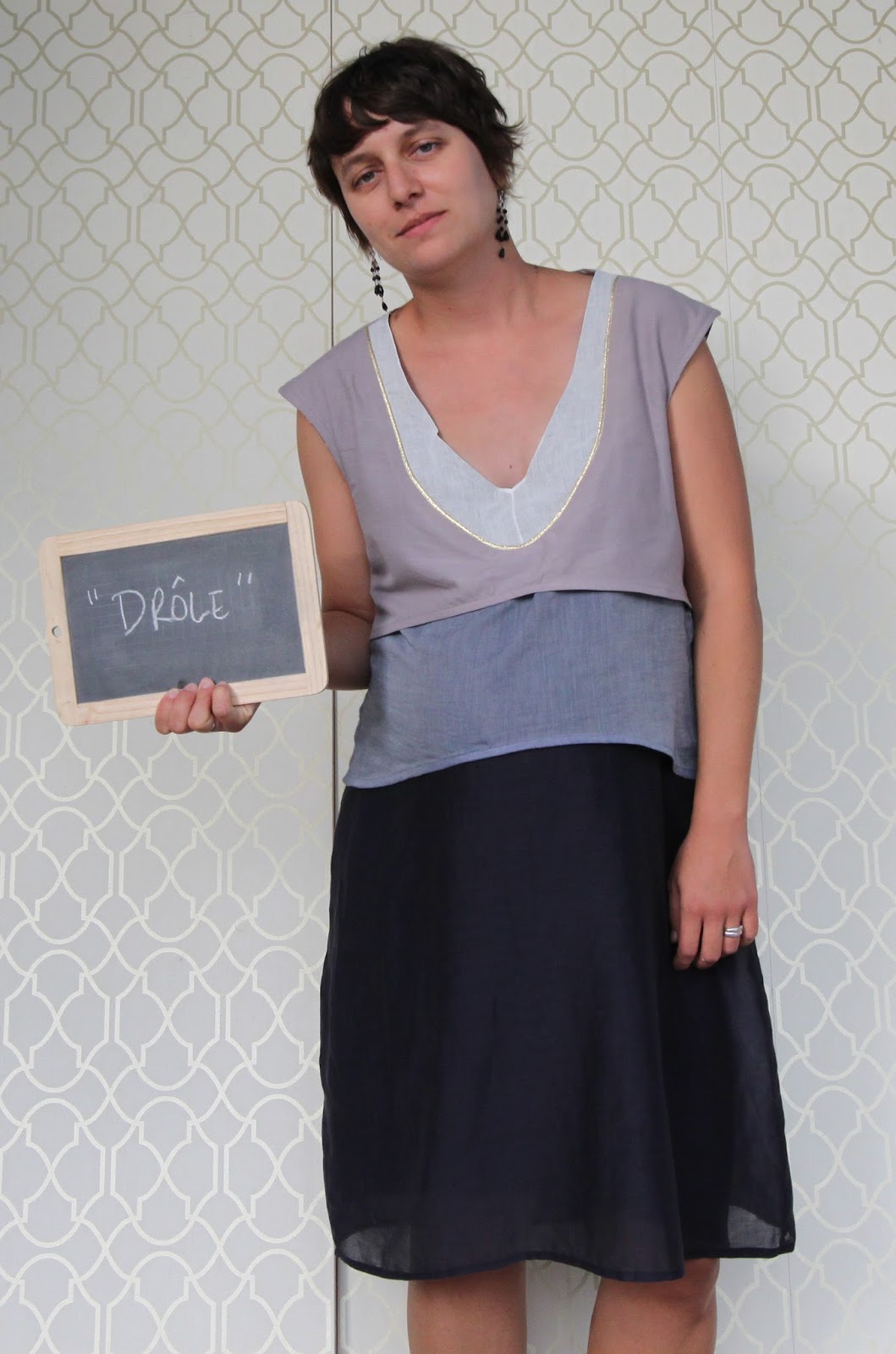 I made this dress last month, to attend some very good friends' wedding. I'm now quite heavily pregnant, so the dress needed to be classy yet comfortable. And I had only 2 weeks to make it...


I had in mind to try a chevron bib dress, inspired by the Victory Patterns "Anouk" one (left picture below). I found a maternity dress pattern I could use as a base, in one of my old Burdas (feb. 2012, right picture below). I also wanted to make a three layer dress, using different chiffons I had in my stash. 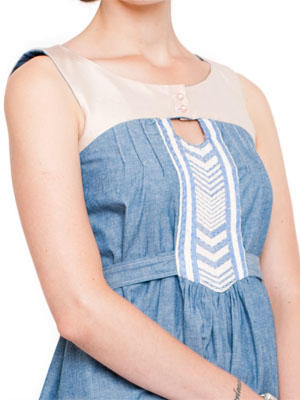 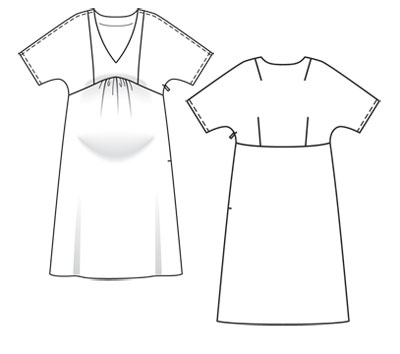 I first made a muslin with the top of the pattern. I changed the bat sleeves into cap ones. I made a few layering attempts in front of my mirror, then on Photoshop (yes, I look ridiculous ;)).

Here are the construction details :
I should have started building the dress from the under-layer, then topping it with the other ones, but I went the other way round...
I started with the top layer, the upper part of the dress. I modified my Burda pattern in order to get a proper bib : the middle part (white) draws a bib, inserted in a single (grey) piece of fabric.
I then dropped the idea of putting chevrons, and used a golden piping instead. I think it works better this way, the dress having a complicated enough construction.

On the front, the light blue layer is stitched to the grey fabric, following the piping line. On the back, the pale blue layer goes down to the middle of the back (high enough to hide a bra, though).

The dark blue layer is stitched to the upper part of the bib, on the front, and to the pale blue one on the back. Those drawings roughly show where each layer is attached :

And here is what the dress looks like on the inside (front/back) :

I then traced the lower lines of the three layers : the grey part stops just underneath the bust ; the pale blue one follows the shape of the belly, and the dark blue layer stops just above the knees (though it doesn't show much). 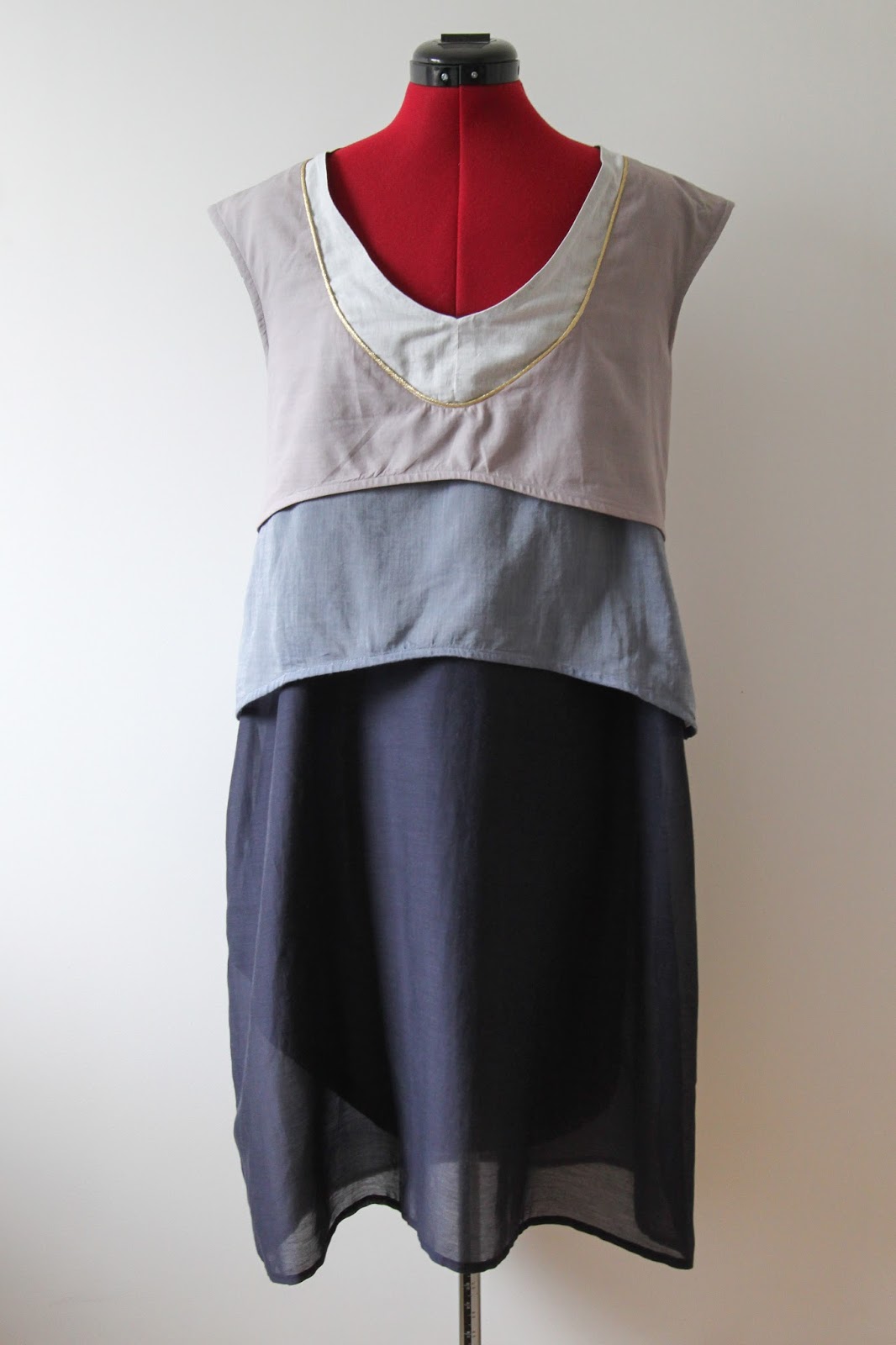 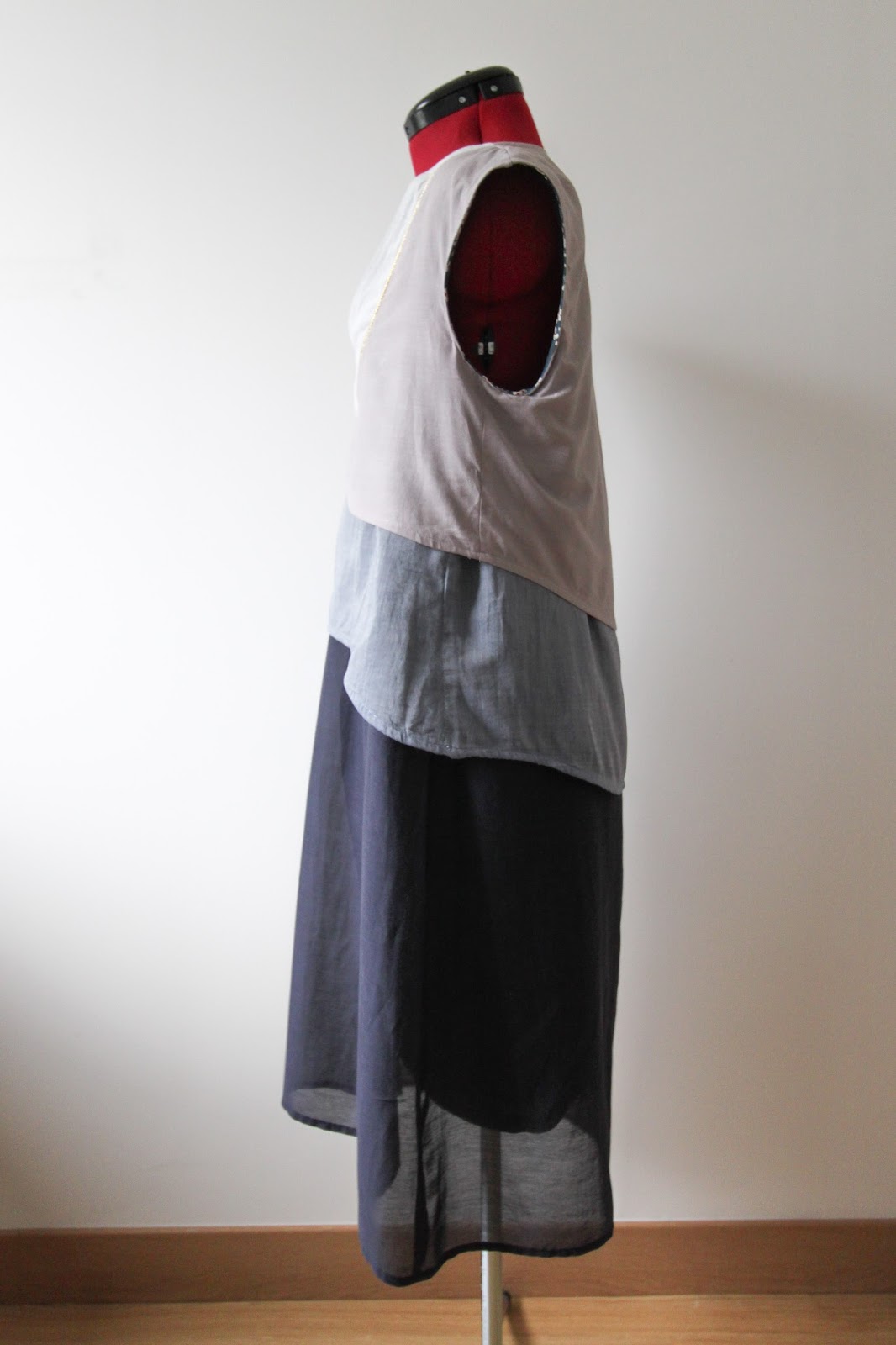 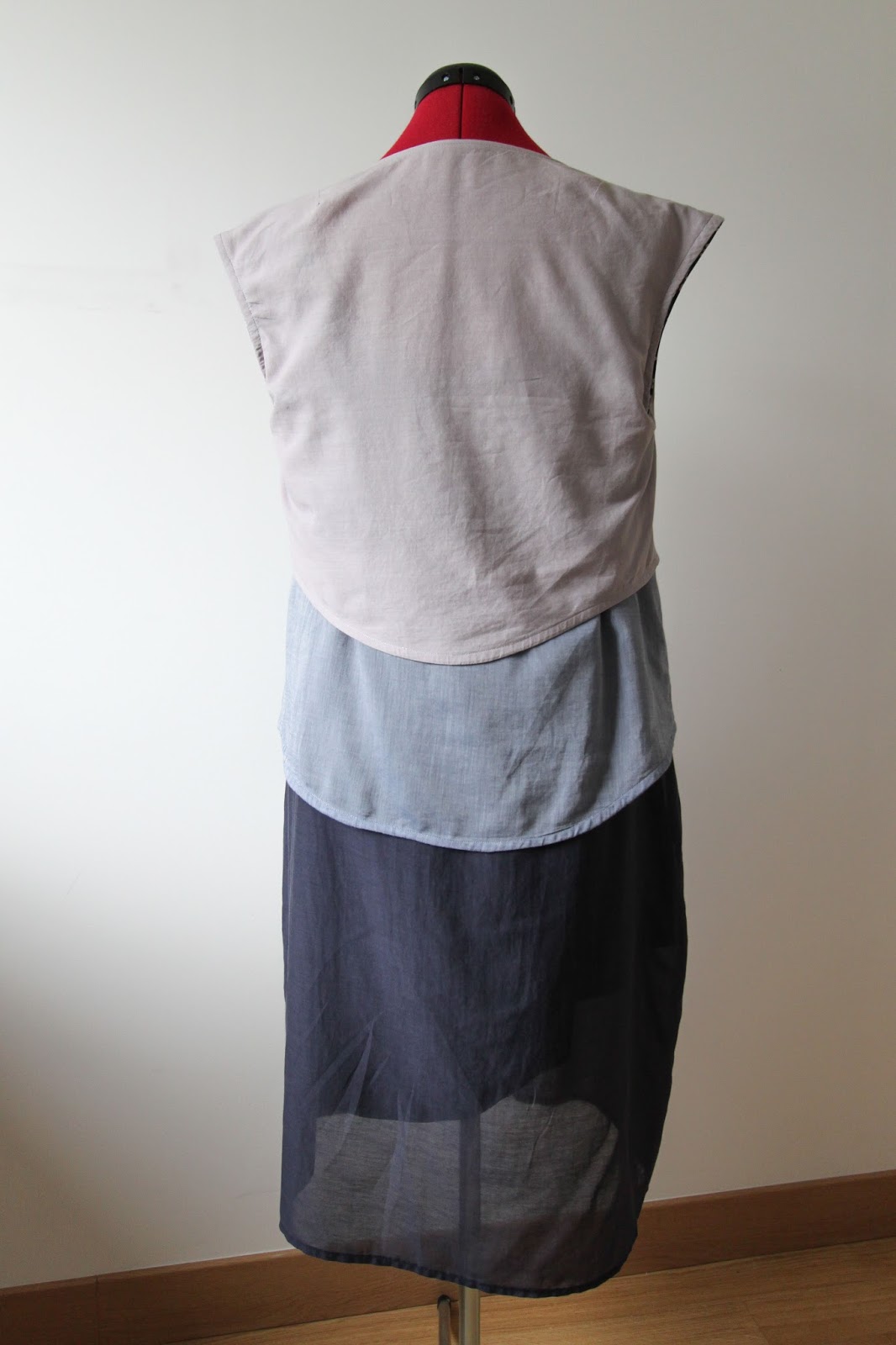 The grey and pale blue fabrics aren't too see-through, but the dark blue one is quite transparent, so I need a lining of some sort. I was in a real hurry by that time (read : the night before the ceremony...), so I decided to go very simple, and only sew a petticoat.
This one starts under the belly, and stops above the knees, just like the dress.
Yeap, too bad I didn't realize that my belly would show, above the petticoat ! Ah ah, it just seems I can't make a project without errors somewhere in the process... Anyway, I wore a dark maternity jersey belt under the dress, and the dress wasn't see-through anymore ;)

I finished the grey and light blue layers with bias tape. The dark one is hemmed very simply.
The armholes are finished with a Mitsy liberty bias tape that layed in my stash. 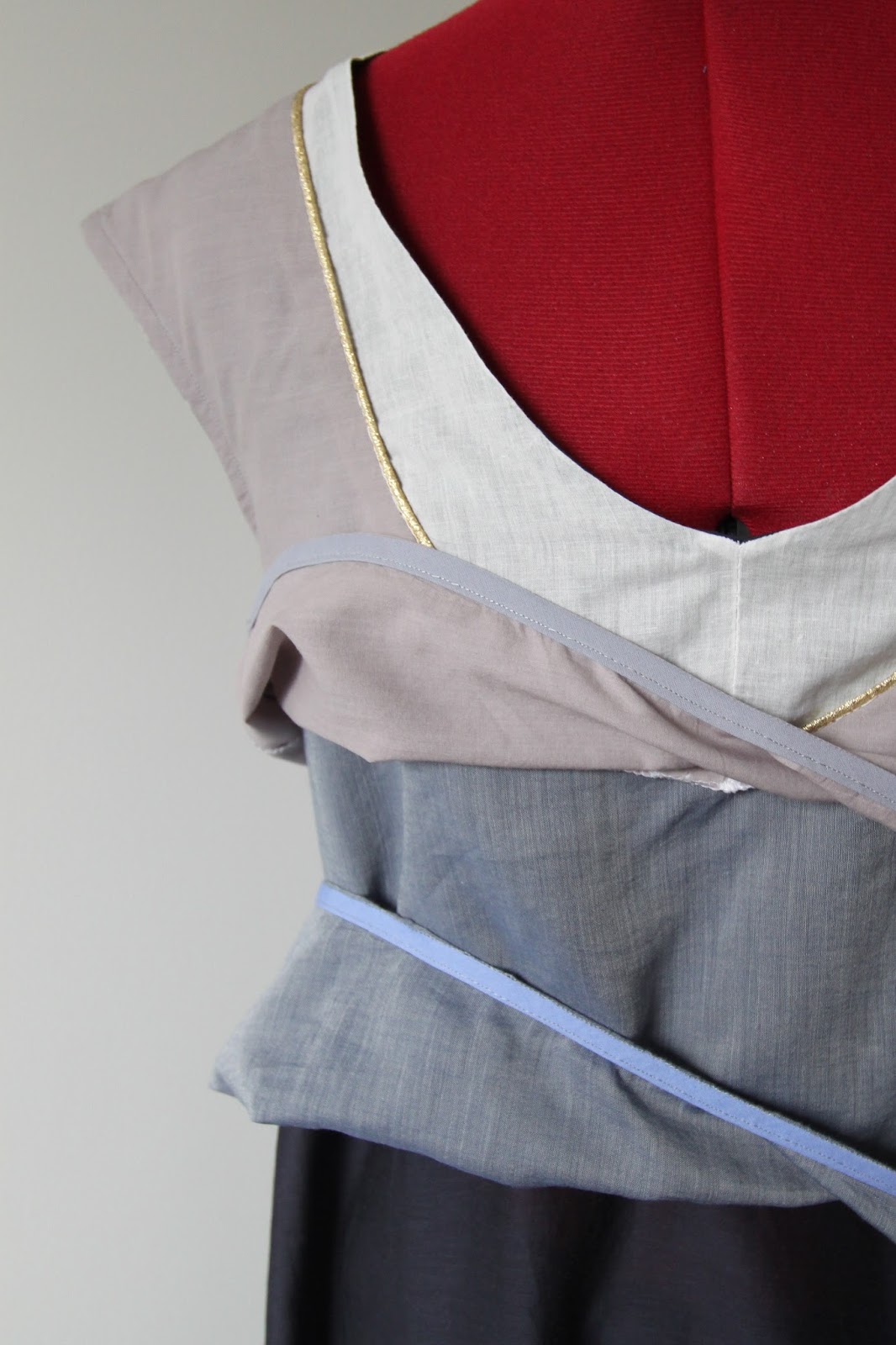 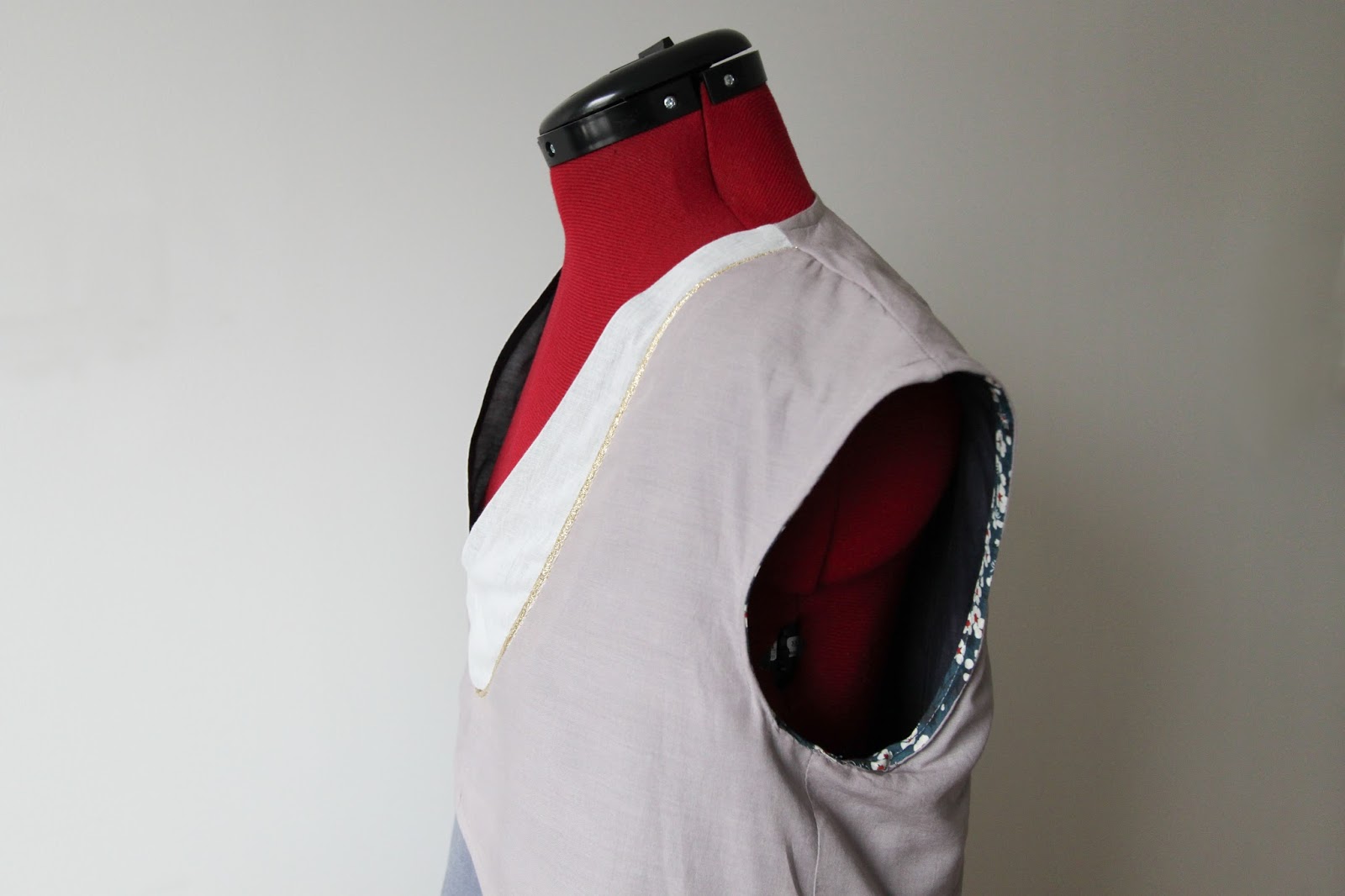 And voilà !
As usual, I finished this project in a Super Mega Hurry : 1 hour before the ceremony, I hadn't taken a shower nor a lunch yet, and we still had to drive to the other side of Paris to reach the Town Hall. But we made it ! (Last year I finished another wedding outfit (blouse and skirt) in the car just minutes before the wedding, so I can say I'm getting better ;) )
Anyway, I'm very pleased with this dress, and I'll probably try to give it a "normal" fit once i'm not pregnant anymore. 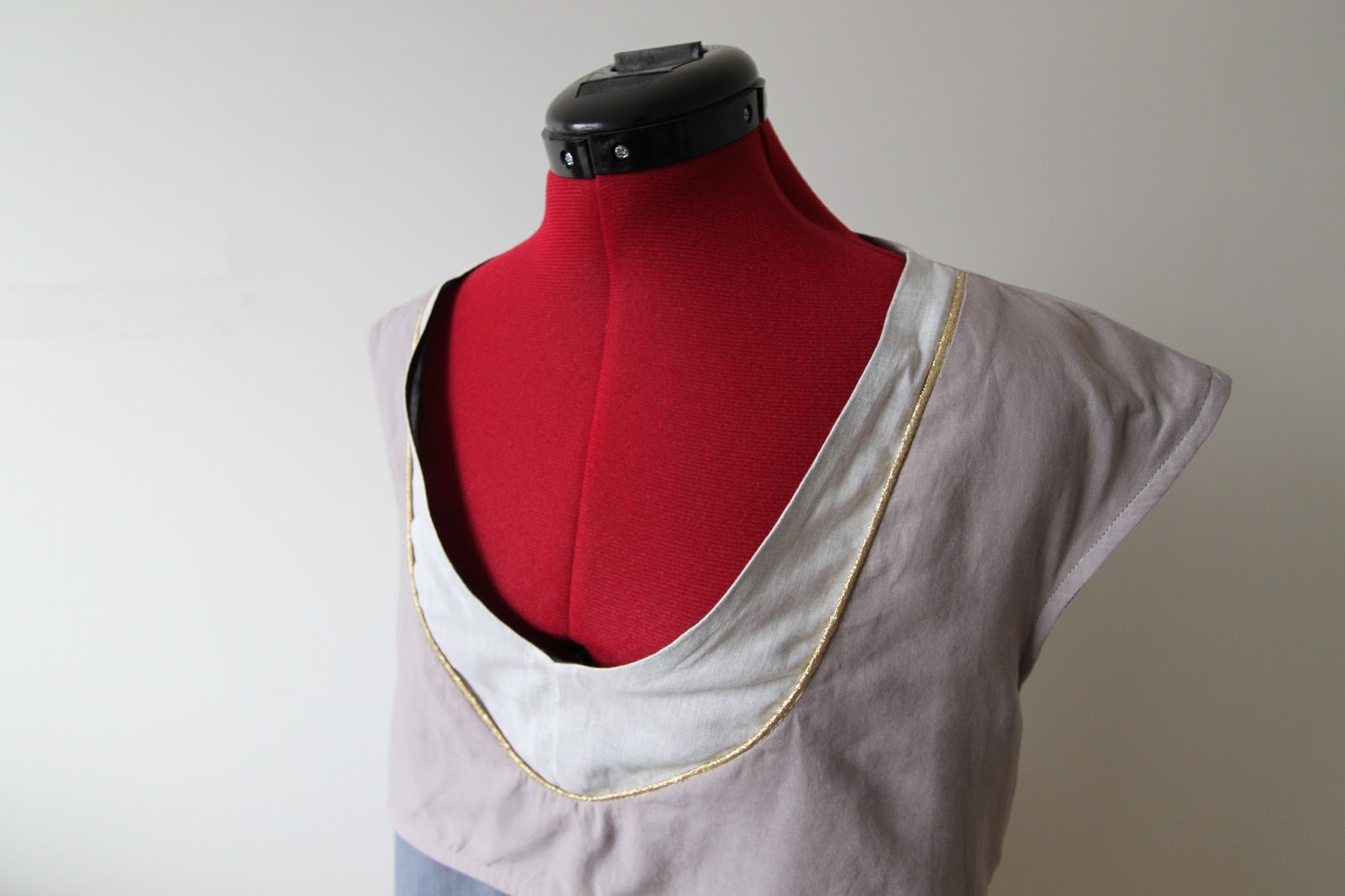 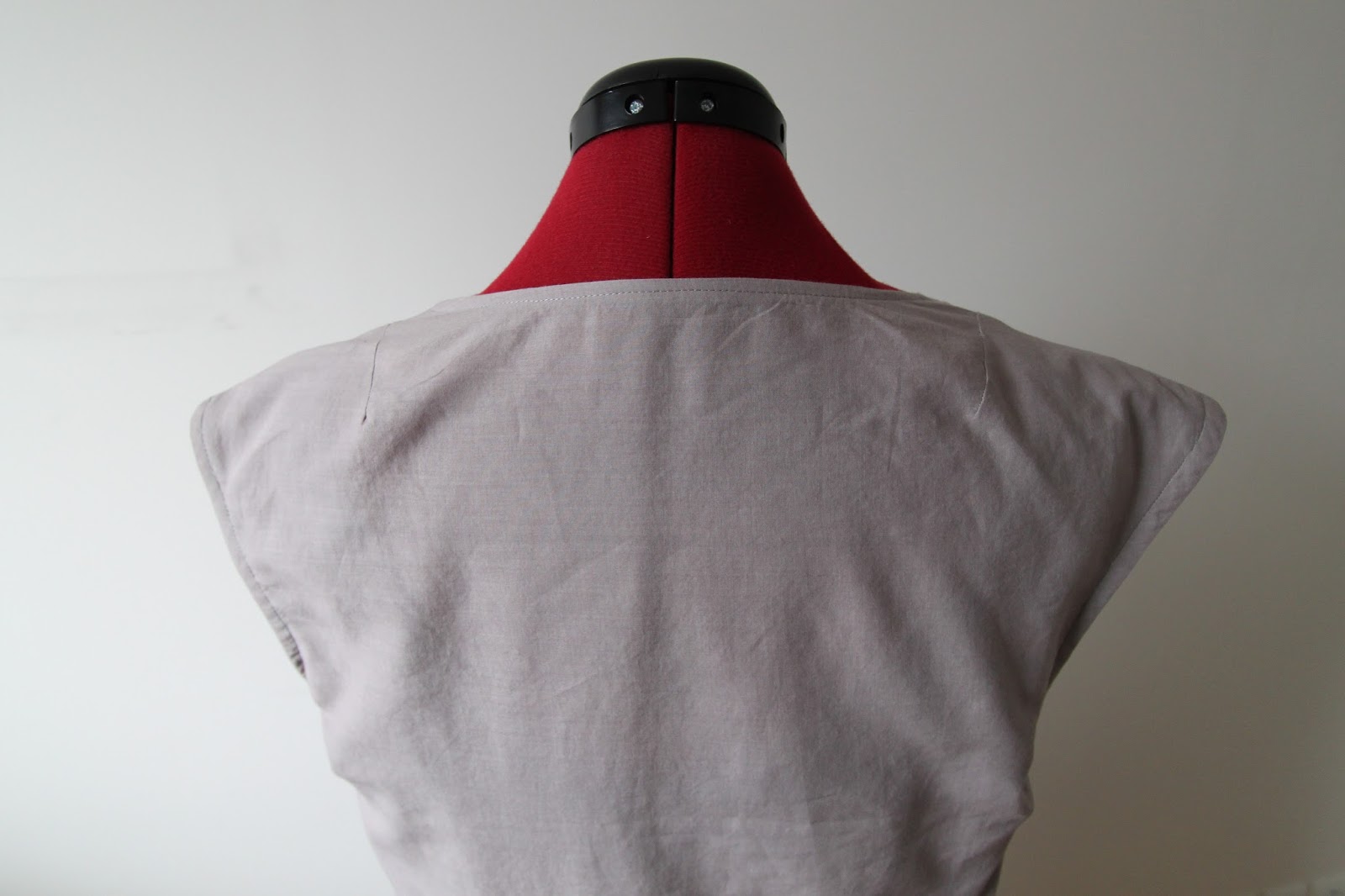 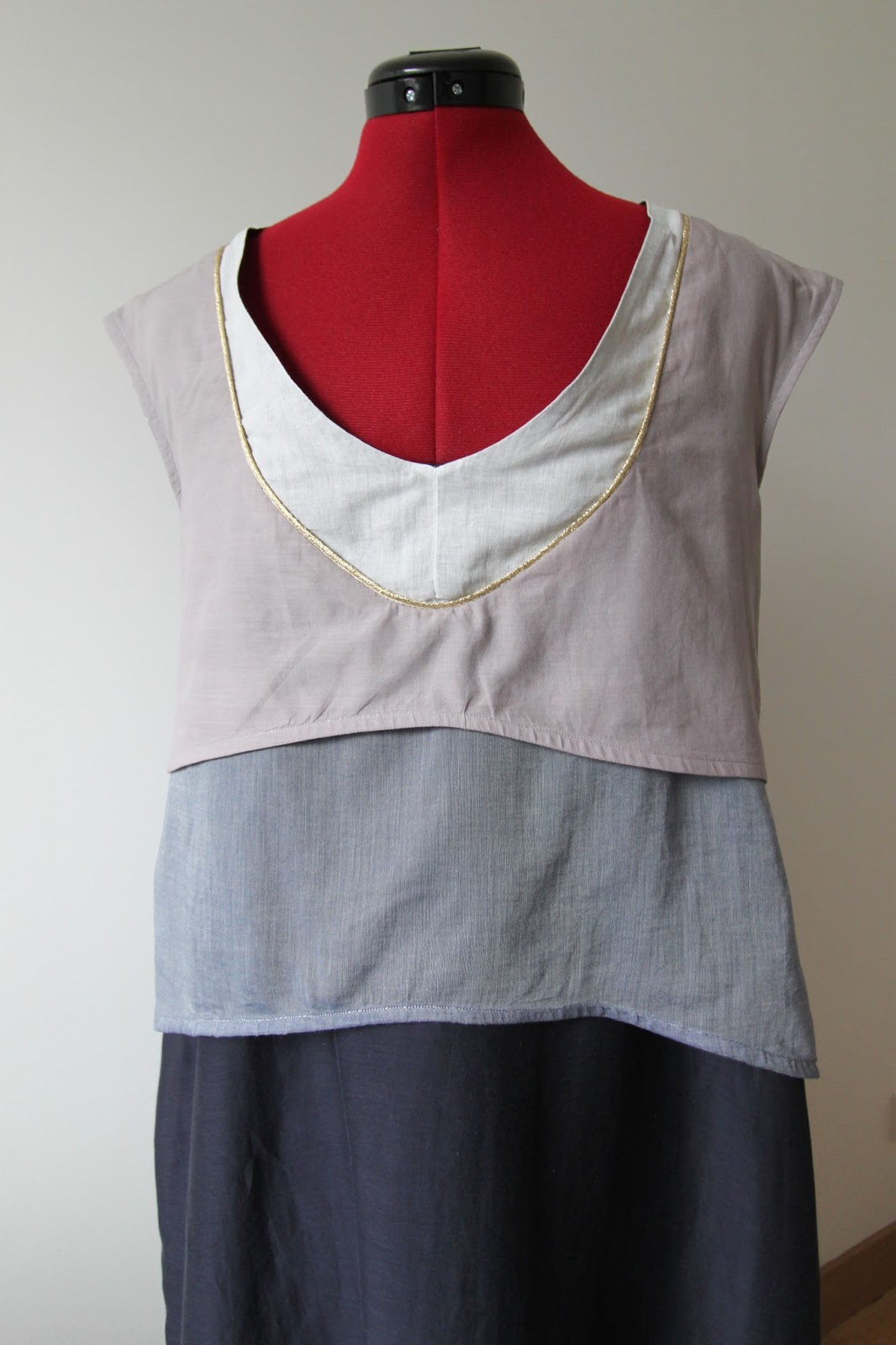 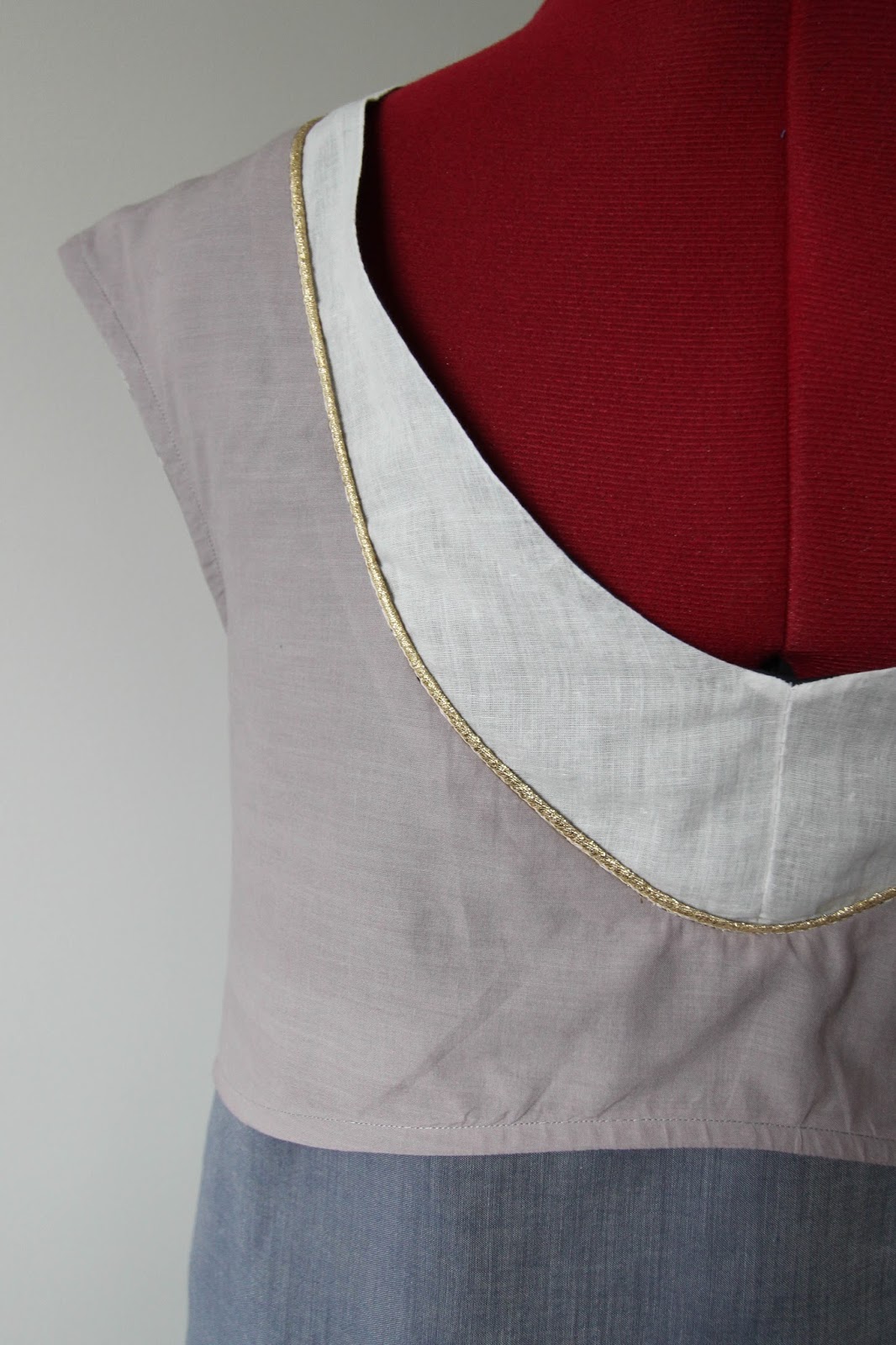 Bonus :
This turned into a proper sewing marathon when the best man asked me to make him a tie, just a week before the wedding. I managed to make one, that I'll post here whenever I get the pictures. Sewed in a rush, but it looked good, here's the best man and I :

Bonus #2 :
I wore a cropped jacket I made a few years back, upcycling a badly cut Primark jacket : I just cut the lower part of it to give it a more interesting shape, and replaced the plain button with a big round golden one. I think it worked well with the dress. 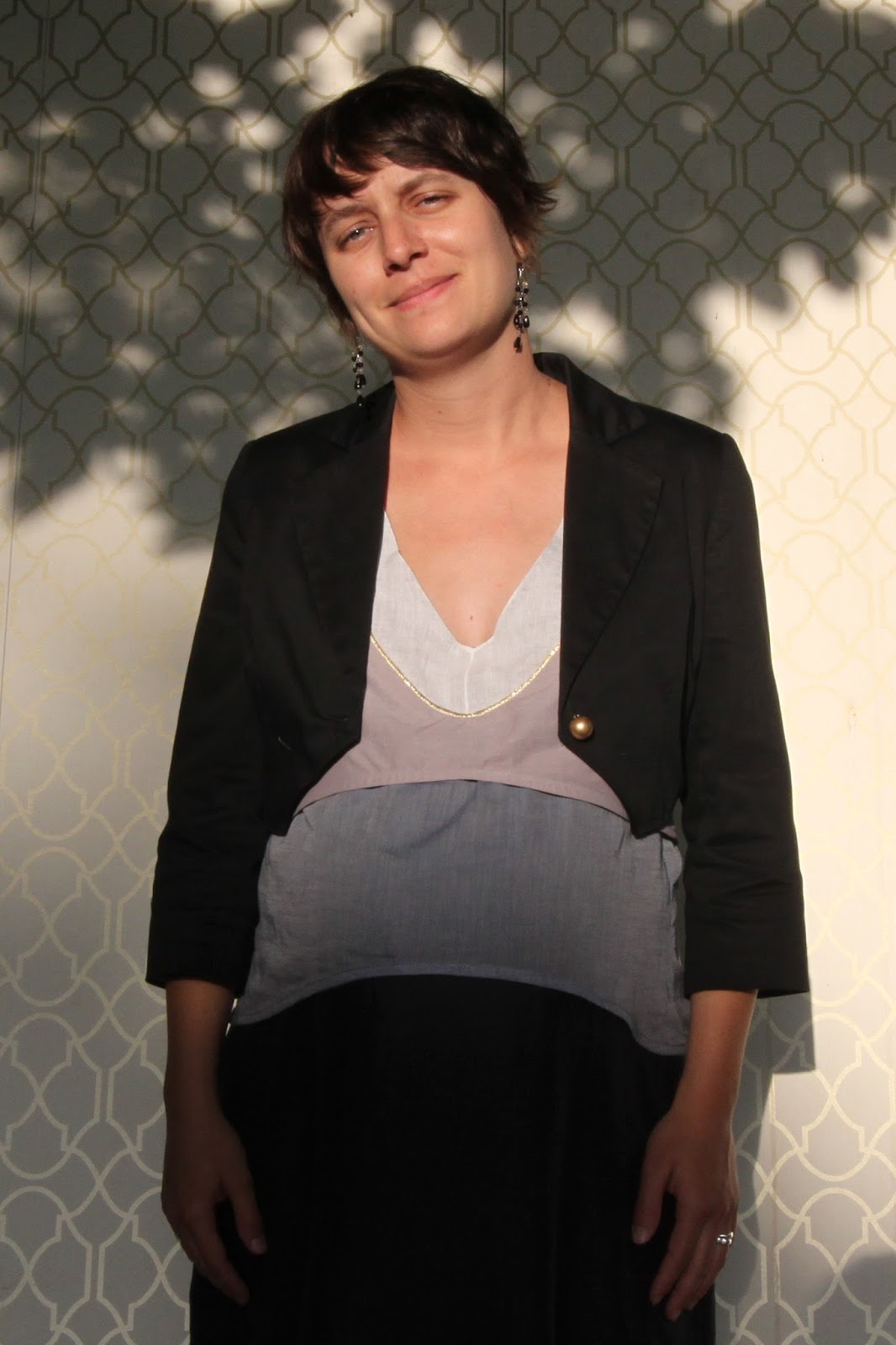 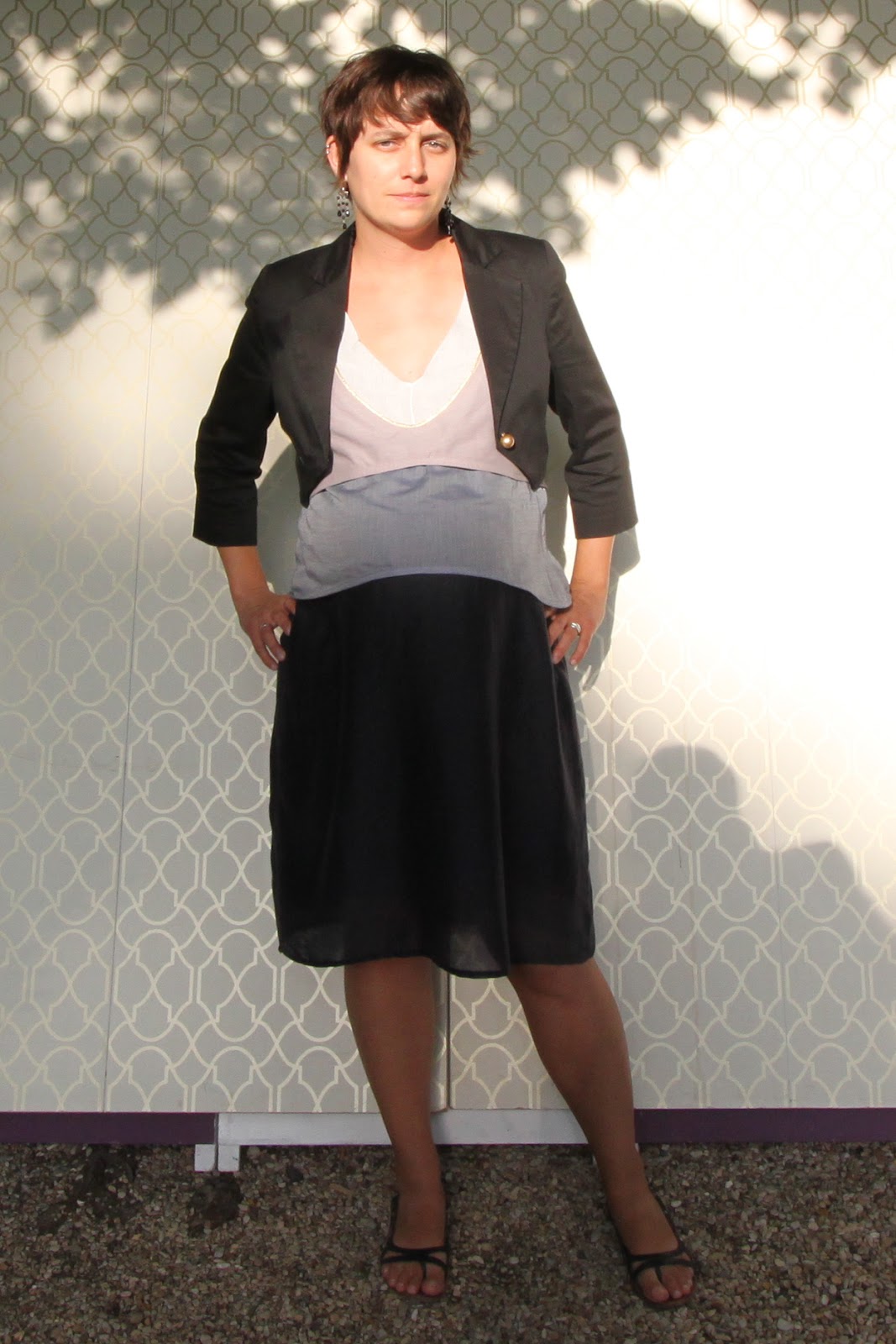 All of this was quite time-consuming, but the wedding was a delight, and we all had a blast !
Tagged
Article plus récent Article plus ancien 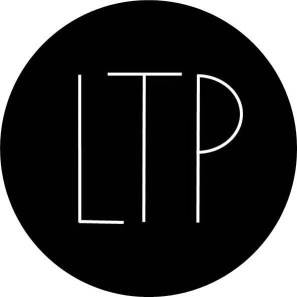